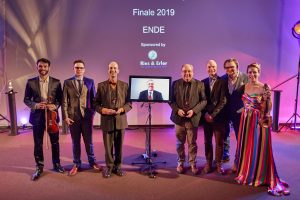 Bringing fresh air into the chamber music scene and redefine the classic music – that’s the goal of the Progressive Classical Music Awards. To the 10th anniversary six compositions are awarded with € 11,000 prize money. Hundreds of submissions from all over the world were spotted by a top-ranking Jury, consisting of Julian Rachlin, Aleksey Igudesman, Benedict Brydern and The Twiolins.

The preselection will be presented on the evening of the final concert by The Twiolins, Marie-Luise & Christoph Dingler, afterwards the audience votes about the award. A musical firework is expected, because the composers had no stylistic borders, only intention is the enthusiasm for the audience.

Bringing fresh air into the chamber music scene and revitalizing the classics was the aim of the Twiolins when they launched the Progressive Classical Music Award (PCMA). The PCMA was initiated in 2009 by The Twiolins (Marie-Luise & Christoph Dingler) first under the name Crossover Composition Award, to expand the repertoire for the instrumentation of two violins. Since then, every three to four years they have set a special task for contemporary composers: to compose new music for two violins, which gets under your skin and leads you to storms of enthusiasm.
The competition has deliberately been openly designed to allow novel music to emerge with contemporary emotions. This in turn should contribute to a sustainable development of the classical concert and audience.

The previous competitions took place in 2009, 2012 and 2015 and had a total of more than 500 participating composers from 55 countries. The PCMA celebrates its 10th anniversary in 2019 and the success story that started in 2009 continues.

Due to the individuality of the individual compositions, it is difficult to find a generic term for the resulting music, but it is intoxicating sounds and rhythms, often inspired by film music, minimal, avant-garde, Balkan and jazz grooves, but also with very own and new stylistic devices.
As a new genre designation, the term “progressive” was introduced. The concept works out: The Twiolins have been touring with this repertoire since 2009 and fascinate people all over the world. Both classical fans and absolute newbies react with enthusiasm to this music and to the unusual cast with two violins. 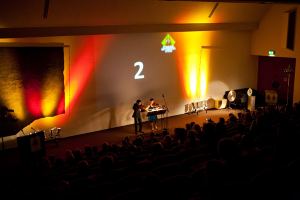 The heart of the competition is the final concert: After a pre-selection by a panel of experts, six compositions will be selected and presented to an audience for voting. To ensure absolute fairness, the compositions remain anonymous, identified only by a number and played by The Twiolins to the expectant audience. Then each listener is allowed to vote and the results are counted. The work that can collect the most votes wins the first prize.

“To take the audience along is the best requirement for a piece that I can imagine as a composer. In other competitions, jury meetings take place behind closed doors and only the music text is read. In the PCMA, two excellent, technically outstanding musicians play the competition entries with passion in a public final concert. And then the audience decides. That’s exactly what classical music needs. ”
Johannes Söllner, composer, 1st prize PCMA 2012, jury member PCMA 2015

The winners will receive prize money worth a total of € 11.000. The compositions are published internationally by renowned publishers: 2012 and 2015 Peer Music, 2009 Ries & Erler, and are recorded by the Twiolins: 2011 “Virtuoso”, 2014 “Sunfire”, 2017 “Secret Places”. The compositions have already inspired subsequent generations: Since 2014, the works are performed at the national competition “Jugend musiziert”.

“Through the Progressive Classical Music Award, Christoph and Marie-Luise Dingler support composers in a way that is barely going on today: all selected pieces are being published, released on CD and – most importantly – performed live with dedication and joy, again and again with a lot of passion. Really a project to preserve our vibrant music culture. ”
Sophie Pope, composer, 3rd prize PCMA 2012

Toggle Sliding Bar Area
X
We use cookies to ensure that we give you the best experience on our website. If you continue to use this site we will assume that you are happy with it.okNoRead more